I have attempted to illustrate here some of the specific parts and details as fitted to a 1-Ton. For photos I have used my own vehicle for IIA specific aspects.

Aside from the unique chassis numbers, a 1-Ton can be identified by certain features. In brief these would be :-

Extended spring hangers. This feature is shared with certain military models but does not mean they were 1-Tons. The UK MOD did not make use of 1-Ton Land-Rovers.

Narrow 11 gallon petrol tank mounted at the rear of the vehicle.

Initially all 1-Tons had ENV axles fitted front and rear. On late IIA vehicles built in 1971, the rear axle appears to have been a Salisbury type. On series IIIs, the ENV rear axle made a reappearance, before both axles changed to the Salisbury type in late 1973. Shortly after, the front axle became a Rover type with uprated differential, however in practice the Salisbury front axle was still being fitted as late as 1976.

The bodywork was virtually identical to the standard 109″ six cylinder of the same time, although the 1-Ton did have a slightly different exhaust downpipe to standard. The only notably different component was the bonnet. When a bonnet mounted spare wheel was specified, the factory fitted a military pattern deluxe bonnet, with side catches and a spare wheel mount using a ring and nuts rather than the common “Z-clamp” type. These bonnets also had the cut outs in the sides for radio box wiring on military vehicles. As the bonnet mounted spare wheel was very heavy, most later vehicles had the spare wheel stowed inside the rear body. A special tray around two inches deep was fitted behind the centre seat in the load bed floor, with the wheel mounted up against the bulkhead on a cut down short-wheelbase mounting. When a bonnet mounted spare wheel was specified on later vehicles, a military bonnet was again used but by now with the strap type wheel holder. This was very rare and so far only two examples are known. From the factory all 1-Tons had the headlamps mounted in the wing fronts, none were built with headlamps in the grille.

The photograph below shows the rear of the front spring, you can just see the strengthening bolt going through the side plates. 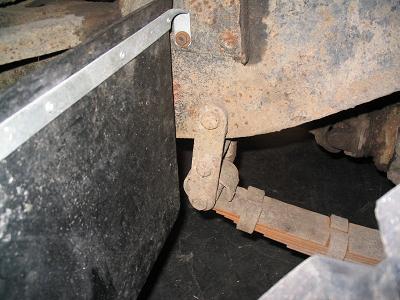 On the photograph below we have the front ENV differential casing and axle as fitted to Series IIA 1-Tons. It is considerably larger than a Rover differential and the front one has a flat front to clear the steering arms, the rear one is more or less spherical. This was the standard front axle on IIA 1-Tons, and on early Series III 1-Tons. 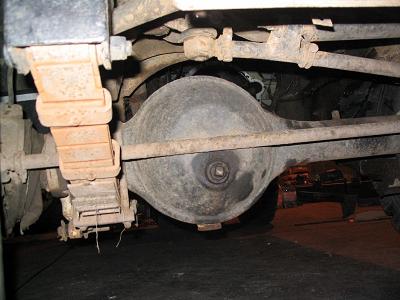 Below is a Salisbury front axle as fitted to Series III 1-Tons from late 1973. This vehicle has aftermarket parabolic springs fitted. Very late 1-Tons had an uprated Rover front axle in place of the Salisbury. 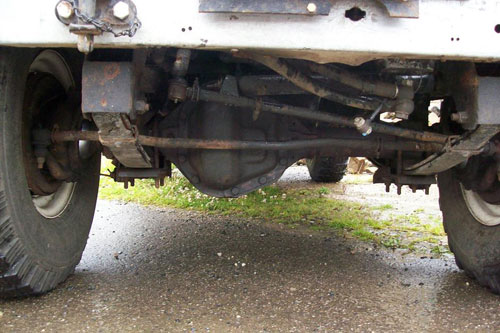 The next photo shows the twin steering relays (circled in red) fitted as standard to 1-Tons. 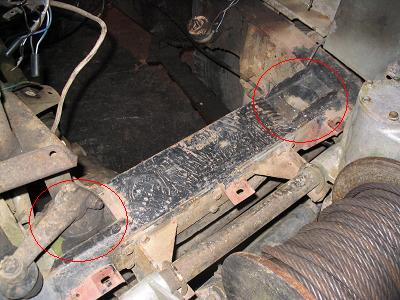 The photo below shows the cutout in the bellhousing crossmember designed to clear the front propshaft. 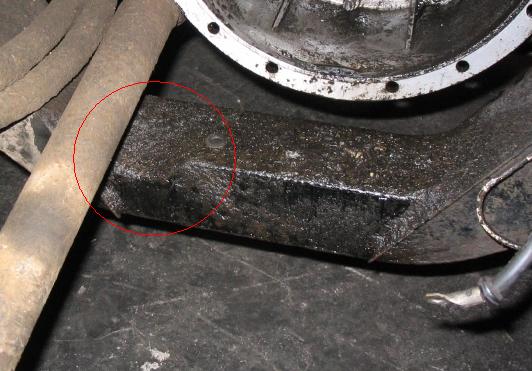 These two photographs show the rear axle showing the extended spring hanger, again with a strengthening bolt through the two side plates. Note also the extended bump stop above the axle. The rear mounted fuel tank was also a standard feature, in this case the narrow 11 gallon  type for use with PTOs. 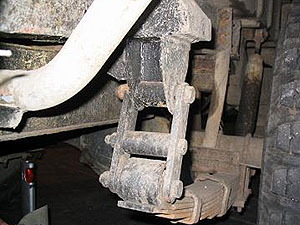 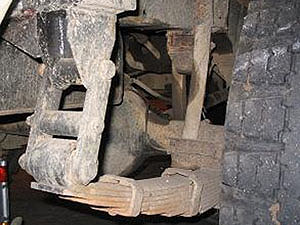 The photograph below shows the forward end of the rear spring, showing the longer hanger with dual mounting points. 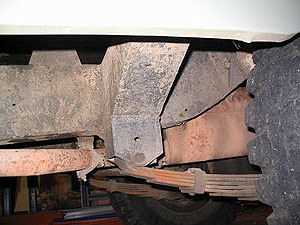 The next photograph shows the extended front hanger, an obvious identifier of the 1-Ton Land-Rovers, along with the ENV front differential. 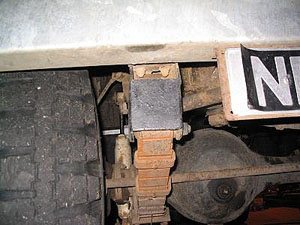 Below can be seen the PTO output cover plate for a 1-Ton type gear box. Note that it has a domed cover rather than the usual indented type. 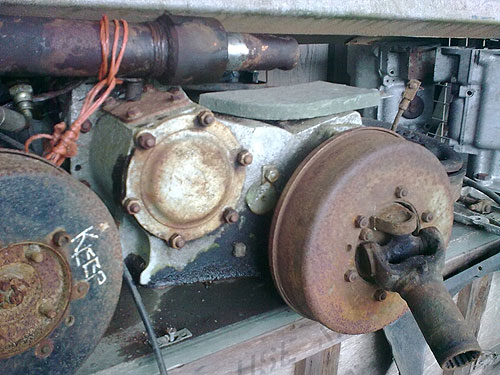 Below is the gear box serial number for a fully synchromesh series III 1-Ton gear box. This is stamped on the driver’s side of the upper main gear box casing. Series IIA vehicles had a similar stamping, but prefixed 229.